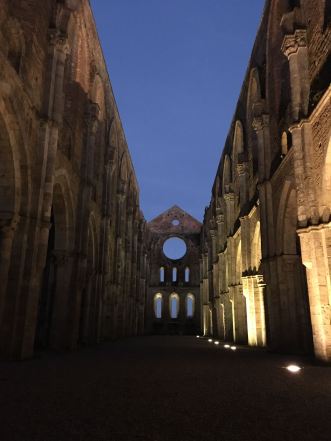 After 4 months of exploring the Tuscan countryside, our current number one is a hidden treasure. We heard about it from our local hairdresser ‘Fabio’. San Galgano is great to visit at dusk. In summer it’s the venue for open-air concerts.

The Abbey of Saint Galgano was a Cistercian 13th century Monastery found in the valley of the river Merse between the towns of Chiusdino and Monticiano, in the province of Siena.

In 1786, the campanile fell, taking with it the roof of the church. The ruins were looted for building material. Some restorations occurred in the 19th and 20th century; but the church remains only a magnificent shell among the wooded valley. The long tall nave with flechet windows and an apse rose window still stand. The abbey’s chapter house and part of the scriptorium also remain.

Is one of the ‘most beautiful villages in Tuscany’. The view is brilliant because Volterra itself is lying on a hill. The city is was founded by the Etruscans. A walk through the winding cobbled streets surrounded by the well-preserved medieval ramparts is like walking in a real filmset. If you get the occasion to visit during low season you will understand this feeling even better. 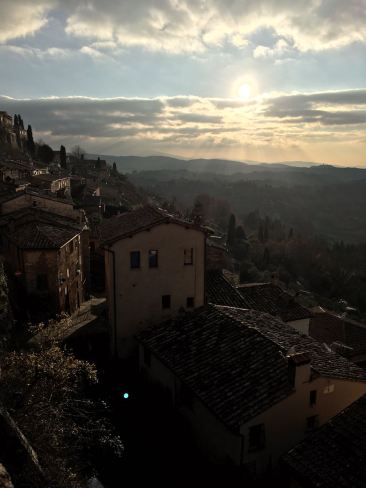 Is the centre of the Vino Nobile and situated in the scenic Val di Chiana. This village is located on one of the highest hills of Tuscany. The cathedral is modest outside, but splendid inside. San Biagio is a pilgrim church just outside Montepulciano wich you really have to visit too.

Is a  beautiful vibrant city in the middle of a landscape with many different views. The Duomo is known for his spectacular floors which are partialy covered during the winter season. The Piazza del Campo with the Mangia Tower has a special shell-shape and is the centre of the city. It is also the place where the famous horse race (the Palio) takes place on the 2th of July and the 16th of August. The contrada history and the Palio still play an important role in the lifes of the Seneses. The Palio is a spectacular annual event from the Middle Ages.  10 of the 17 contradas (districts) compete for the ‘palio’ which is a silk banner. Every contrada has its own traditions, symbols (often an animal), colours, costumes and its own church and palio museum. The winner will have the ‘priviledge’ to disturb the night’s rest of  the areas of their opponents for the following year by going on the streets with their drums and singing. We are grateful to live just outside Siena, because they can really make a lot of noise even after midnight ;-). 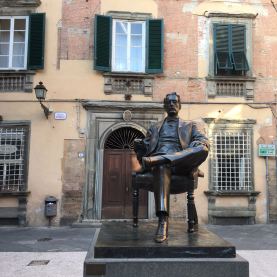 This awesome place is 2 hours drive from Siena, so a good reason to spend the weekend. Walking through the city shows that Lucca always had been a rich city. The ramparts are the n°1 to do. Do the walk of 5 kilometers in one go or enter the centre and split your walk up. N° 2 is the Piazza Anfiteatro, the central place built on the amphitheater of the second century. Feel the vibes of Puccini and decide to come back in the summer for an outdoor opera performance. Eat in Ristorante La Norma in de Via San Nicolao 26 and get a delicious tasting menu for a real cheap price. Ristorante Norma

One of the twelve most important Etruscan cities, Arezzo had a starring role  in the film ‘La vita è bella’. The medieval Piazza Grande has a sloping pavement. The Basilica of San Francesco of the 14th century is decorated with beautiful frescos which were also admired by Juliette Binoche in the movie ‘The English patient’. Every first Sunday of the month the old centre becomes the biggest antique market of the whole region. Even on other Sundays it is a very pleasant and interesting place to visit.